How to make friends when you have social anxiety 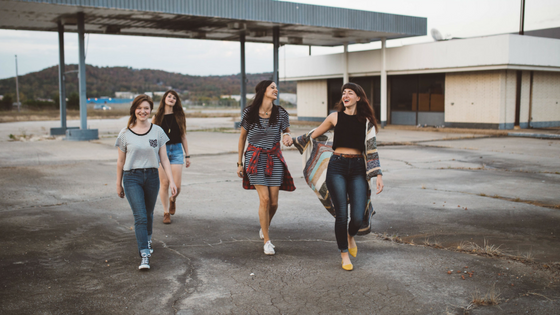 I had two bad days this week. Sweaty palms, a huge knot in my stomach and shortness of breath were just a few of the symptoms that followed me around whilst I tried to appear normal to the rest of the world. I try not to bother people with my anxiety when it crops up; firstly because there’s not much anyone can say to make it go away and secondly because I don’t like drawing attention to myself. I guess I should work on that.

I did overcome one fear this week though; I went to my first blogging event on a day where my anxiety was really bad. Seems impossible right? It was all down to making some new friends, something I never thought I would be able to do since I started suffering from anxiety and panic attacks a few years ago. Here’s how I did it…

The biggest thing that helped me get through those few hours of socialising with strangers was already knowing a few people attending. It meant I didn’t have to turn up on my own or find anyone to talk to! If you’d asked me six months ago what I was most looking forward to about moving to Birmingham the last thing on my list would have been making new friends.

For me, going out and meeting new people is like asking someone with a fear of spiders to go on “I’m a Celebrity” and eat bugs in return for their dinner. I would rather just go hungry. It’s something I’ve feared so greatly for over four years now, that I can’t quite believe I’ve built my own little circle of friends all on my own. I only have a handful of friends but I personally think that’s better because I can explain my mental health problems better in a small group, which is means everyone is aware of when I’m not feeling 100%.

I didn’t have a clue how to even start meeting new people, and to be honest it wasn’t something I was planning on doing straight away. My main focus when I moved to the city was to find a job and work on my blog. I found a job within two weeks and started building my Twitter followers to get more blog traffic. Whilst I had some extra time on my hands I followed every Birmingham Twitter group I could find (Brum Bloggers, Brum Hour, etc) and got talking to other followers.

I noticed a few other bloggers tweeting things like “I’ve just moved to Birmingham and I don’t know anyone” and felt compelled to speak to them, even though it made me really nervous. Leaving the comfort of Scotland where my friends and family were always on call meant for the first time in my life my loneliness outweighed my anxiety, so I reached out to a few girls in a similar position.

My advice to anyone looking to make friends on Twitter would be to make as many connections online as possible, and don’t think about the actual real life meeting until it happens. I talk to lots of people online that I’ll probably never meet in person, so I just enjoy the conversation for what it is; a brief meeting of minds over a funny GIF or a relatable comment. Over time you’ll strengthen some friendships and these are the people you should meet in real life. The girls I met on Twitter actually talk more to each other via text than we do online, I think that’s a good thing because it feels more genuine.

This one is hard, because it can be really scary to tell people you’ve just met that you have mental health problems. I urge you to mention to at least one of your new acquaintances that you have some anxiety issues, so that they understand if you flake out last minute or don’t seem your usual self once in a while. In fact, social media is perfect for this because you can tell them about it – in as much or as little detail as you desire – via direct message instead of actually having to go through the horror or mumbling the words out loud. Go on, be brave. It’s so worth it.

Have you struggled to meet new friends because of social anxiety?