How to tell your friends you have depression 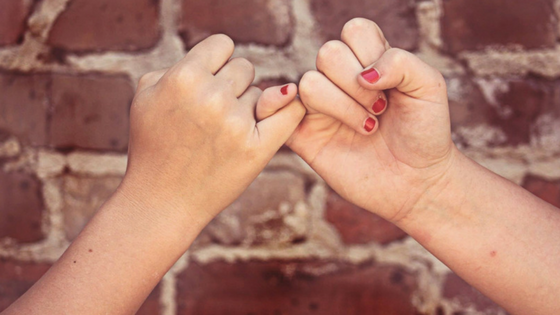 I told some of my friends that I had depression as soon as I got diagnosed. The reason being; I knew I couldn’t hide it from them any more. My mood was unpredictable, my actions out of character and I was unfit for work. As far as my Facebook friends were concerned however, I was fine and dandy! I didn’t want to tell the whole world about my problems back then, but I knew my best mates had to be kept in the loop. It was hard. I felt embarrassed. Like I’d failed as a human and that I was somehow now using an illness as an excuse for not being able to cope with life. I know now that my inability to cope was merely a horrible symptom, and admitting I needed support was my first step on a long and winding road to getting my happiness back again. From my own personal experience, here’s my advice….

Be prepared for varied responses

A lot of people think that their inner turmoil is clearly visible to people on the outside. The telltale sighs of depression like being reclusive, feeling agitated, loss of appetite and inability to concentrate may feel acute and painfully obvious to you but don’t be surprised if none of your friends have been concerned about your well being.

It’s not that they don’t care, but simply that your symptoms haven’t been brought to their attention. They may think you’ve seemed different, but we all go through bad spells that aren’t necessarily linked to mental health concerns. So be prepared for your friends to be kind of surprised that you have some problems of that nature.

On the other hand, some friends might be overbearing; they might ask really in-depth questions about your health, thoughts, feelings, medical advice and medication. Some friends want to help ‘cure’ you and will offer you advice that might seem patronising, such as “maybe you just need to let your hair down” and “you should go on holiday”.

Try and be appreciative. I know it’s hard. Even if they don’t understand fully what you’re going though it’s good that they want to help. They might find this post helpful.

Give them time to process what you’re saying

If your friends have never dealt with someone who has been diagnosed with depression then they might be really uncomfortable when you start talking about your problems. Try not to be offended if they seem standoffish or act like it’s not a big deal. You know it’s a big deal and you’re trying to get better so that’s all that matters.

Give them time to listen to what you have to say. Let them go home and talk to their partner or family about the subject (they don’t necessarily have to mention your name) so that they can make sense of what you’re going through and consider their own actions.

Being friends with someone with mental health issues can be kind of scary. They might not know what to say or how to act around you because they are worried about upsetting you or making your condition worse. This is nothing to feel guilty about, just believe that if they are a real friend they’ll do what they can to help comfort you.

Think of one way they can help you

Before you bring up the subject have a think to yourself about what you want from them. Their instinct will likely be to utter that dreaded phrase, “Let me know if there is anything I can do”. I mean seriously, has anyone ever responded to that comment by actually asking for help? It’s one of those awkward “I want to help” moments where no one quite knows what to say.

As you know, depression feels like a tonne of bricks has been laid to rest on top of you, so small tasks might pile up whilst you take time to recover. Try and pinpoint a few things that are looming over you and ask if they would mind helping out.

I remember my mum offered to help me clean my house and I was really offended, when really my life would have been a little more comfortable had I just let her help. Looking back, I’m certain it would have given her some purpose too during a difficult period in our relationship.


This can be really hard, because maybe you’ve just been diagnosed in which case your symptoms will likely become different over the coming months. You don’t need to go into the specifics about how you’re feeling, but it would be good to explain the things your are finding particularly difficult. It might be shopping for groceries, driving to a doctors appointment or dealing with some unpaid bills. My problem for a long time was being out with big groups of people who weren’t my very close friends and family.

I became very reclusive and lost all self-confidence so social gatherings were my number one fear. Over time I managed to express this to my friends and they still accommodate me to this day. If I don’t want to go clubbing, drinking or into a crowded venue they don’t expect me to. They know drinking alcohol makes my condition worse so they don’t pressure me to have a drink when they are having one.

Knowing that these things weren’t expected of me took a huge weight off my shoulders, and when I was at my worst all of my best friends made an effort to see me in an environment where I was at ease.

Have these tips given you the confidence to talk openly to your friends about depression?